If you have been listening to the social media updates these days, you would have heard about fans gushing over the return of AMCâs Breaking Bad and its finale this coming weekend. In fact, according to Mashable, Breaking Bad topped the charts of âThe Most Popular TV Series on Earthâ at second place and won Best Drama at the Emmys, with fans liking the show over 80k times on Facebook. We were part of the action when we dove into the Facebook ad platform after the show’s production company asked us to promote the Official Breaking Bad Merchandise Store on season sixâs premiere. Facebook allowed us to target users in the following segments: general fans of the series who already âlikedâ the TV show page #breaking bad; users who âlikedâ specific characters like #Jesse Pinkman or #Walter White; âdie-hard fansâ who âlikedâ any of the seriesâ characters on Facebook and employed both NewsFeed ads and the Right-hand column ads for comparison.

Letâs first compare the effectiveness between Right Column Ads and Newsfeed Ads. As you see above, we created two ads geared towards those that already âlikeâ the character, Jesse Pinkman and the results are as follows:

At first glance, the right-column ad seem to have performed better with a much higher volume of impressions and clicks. However, one needs to take note that the right-column ad also showed the ad multiple times to the same user in addition to âsocial impressionsâ which highlighted the userâs friendsâ relevant activities, which may explain the overall higher impressions and clicks. In comparison, the newsfeed ad showed only once to each user, which was perhaps Facebookâs way to minimize disruption in the userâs experience, naturally translating into lower impressions. However, the higher visibility did generate a higher CTR than the right column adâs. As the right column ads were not as visible in the userâs line of vision, they were easily ignored and surpassed, as illustrated in their comparatively low CTR and Link Clicks. It is also worthwhile to note that the Newsfeed ad managed to achieve a higher CTR and lower cost per click while spending less than one-fiftieth of the right column adâs ad spend. Moving on to the scope of target parameters, we will compare three right-column ads that targeted users that liked either #Breaking Bad, #Jesse Pinkman, or was a âdie-hard fanâ that liked any Breaking Bad subject (heisenberg, #Saul Goodman, #Jesse Pinkman, #Walter White (Breaking Bad), #Skyler White, #Hank Schrader or #Gus Fring). 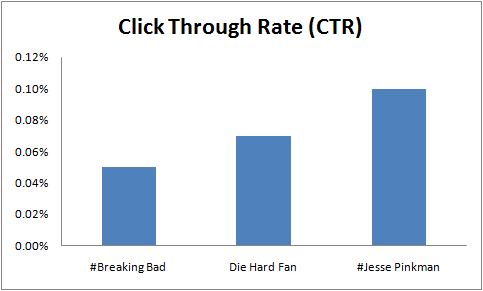 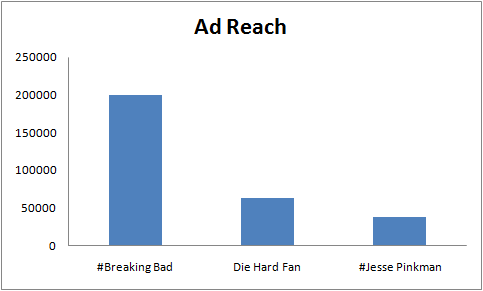 As seen above, the ads targeted to those that already liked #Breaking Bad had the highest ad reach butÂ the lowest CTR, which was unsurprising as it was the broadest category and did not cater to the users specifically enough. On the contrary, the ad reach for the specific category of #Jesse Pinkman was the lowest, and it generated the highest CTR. The die-hard fan segment fell in the middle as it bundled all fans who liked any character hashtag of the series. In terms of cost-effectiveness, employing a precision targeting campaign like #Jesse Pinkman was preferable over others, as seen in the table below:

Targeting based on broad segments such as an entire population that likes a certain TV series is not only costly, but generates low returns compared to its reach. In such a case, choosing a narrower interest group such as a specific TV character like #Jesse Pinkman, is not only cost-effective, but relevant, as they tend to have higher purchase intent which can translate into a higher conversion rate. The Facebook advertising platform is still in its early forms, with its ever-changing advertising tool names and rules. However you can conduct an effective social-media campaign on a relatively low budget compared to other traditional media by employing precision targeting. Speaking of Facebookâs developing advertising platform, one of Facebookâs advertising rules is the limit on amount of text allowed on the thumbnail picture. According to Facebook: 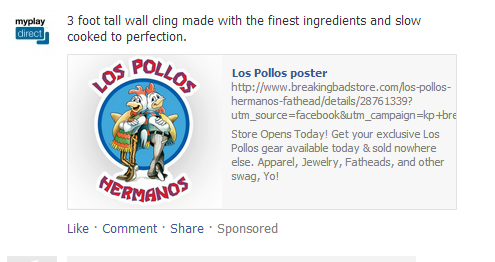 This ad above was disapproved because of the heavy use of text within the image.Â While this one with was somehow approved, with its glaringly large text of Jesse Pinkmanâs signature phrase, âYO BITCH!â Clearly, Facebook still has a long way to go in terms of filtering ad copy.

We hope you all enjoy the the Breaking Bad finale this weekend. Also, we’d like to give a special thanks to our summer intern Michelle for putting this blog post together!