Most "Liked" NYC Restaurants In Social Media: The Sequel

Only in New York City could you find a week dedicated to celebrating food expand like the Stay Puft Marshmallow Man to sprawl over the course of a month. NYC’s famed and illustrious Restaurant Week is the best time for the city’s inhabitants to ascent on a variety of dining establishments they haven’t had the chance to experience thus far. Gentlemen with tight budgets, this is the perfect opportunity to impress your lady with a date to a restaurant where meals may cost $100+ per person. Don’t tell her it’s restaurant week and pretend to have a ‘connection’ with the chef at the establishment you visit. “You’re welcome” Â© Kobe Bryant. 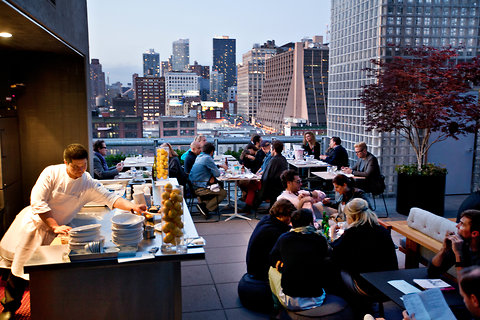 As much as Promediacorp loves to eat, we simply couldn’t just tell you about our favorite haunts, especially since Avi’s sole contribution would be Pita Grill, so we’ve decided to provide an updated list of the top 10 New York City restaurants with the most Facebook fans. To be fair to our beloved Mom & Pop shops, we tried not to include chains with a multitude of locations. We still love you Shake Shack!

The following is our list of the 10 most liked restaurants in New York City (view the original Most Liked Restaurants in NYC post):

Lavo is an Italian restaurant that magically transforms into a dance club once the sun goes down. The establishment was concocted by co-owners Jason Strauss and Noah Tepperberg, who have also successfully delivered delectables straight to your stomach from Stanton Social and Tao. Lavo has successfully leapfrogged last years top restaurant, Eatlaly, by increasing it’s Facebook likes from 11,544 to 29,805, which is an improvement of 18,261!

Culinary giant and Rutgers University alumnus Mario Batali introduced a Walmart sized supermarket stocked solely with the finest in Italian foods and wines. When I say Italian, I mean imported directly from Italy. You will not see Chef Boyardee displayed on these shelves. Not only can you pick-up groceries, but there are also plenty of restaurants housed within the Eataly estate, in case you’re too famished to fire up the oven that evening. With over 25,000 likes on Facebook, along with occupying the top spot on our list last year, we don’t see Eataly’s success slowing down any time soon.

Established in 1888, a staple attraction of the Lower East Side, the 124 year old Katz’s Delicatessen is a bustling establishment that is filled to the brim with eager customers seven days a week. Upon entering the deli, you’re greeted with the aroma of corned beef and nostalgic photos of a multitude of celebrities that have visited the landmark. A scene fromÂ Harry Met SallyÂ was filmed here. You should “have what she’s having”.

Why go to a dull bar that serves drinks with wings when you could enjoy a wine and chocolate bar? Ayza offers just that, along with a full menu of exquisite edible options to whet your appetite. Have you ever had a twenty-Layer CrÃªpes Cake BrÃ»lÃ©e? If not, you need to hail a cab and head to 11 West 31 Street immediately.

With celebrity regulars like Adam Sandler and Woody Allen, this 75 year old deli has racked up a slew of online fans and has even more physically walking in its doors daily. This dining establishment has one of the most impressive work ethics by only closing 2.5 hours every day. Rueben sandwiches and cheesecakes are the main draws, but definitely make sure to take a gander at the rest of the Jewish delicacies available.

Jason Strauss and Noah Tepperberg land on our top 10 list yet again with their Asian fusion restaurant entitled Tao. Touted as the largest Asian restaurant in NYC, the space provides dim sum brunches and exquisite dinners that will fulfill any appetite. Make sure your wallets and pocketbooks are packed with bills though, because you’ll need to feed the cash register a pretty penny after you finish with your digestive system!

Rounding out our list is a restaurant that almost has a perfect rating on Yelp, even with 642 reviews and counting. Eleven Madison Park has accolades all restaurants dream of, including being ranked #10 out of the world’s 50 best restaurants. Also, Chef Daniel Humm is a James Beard award winner. Be forewarned: get ready to clear out your savings account for a night on the town at this fine establishment.

Anyone that’s partied close to Chinatown knows this restaurant very well. Wo Hop is a great late night haunt with cheap eats and large portions. This Chinese food hideaway is tucked away in a basement on Mott Street, but trust that it isn’t difficult to find. Just keep a look out for the line leading into the entryway, practically 24/7.

You only need two words to describe this space: Unlimited. Sangria. Yes, you read correctly. Calle Ocho offers an unlimited sangria bar for brunch patrons on weekends. Boozy brunches are the BEST brunches. Oh, and they serve food here as well, from what we’ve heard.

If you ever happen to find yourself in the Flatiron District, craving sweet potato fries with a maple syrup dipping sauce and baby back ribs, you’ve found the right place. If the maple syrup isn’t enough for your sweet tooth, they also provide a bakery housed within the restaurant to cover all bases. Say hello to Pitmaster Kenny Callaghan on your way out if you get the chance.

We took the time to dig a little deeper and find out some interesting facts about what restaurant genres were most popular in New York City. In comparing the statistics from 2011 and 2012, from a test sample of 100 restaurants, we found that steakhouses led the pack by a substantial amount, tallying 3,554 more average Facebook likes in 2011 and 3,550 in 2012 than the closest competitors. 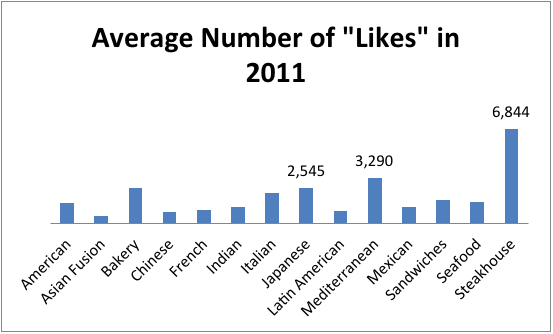 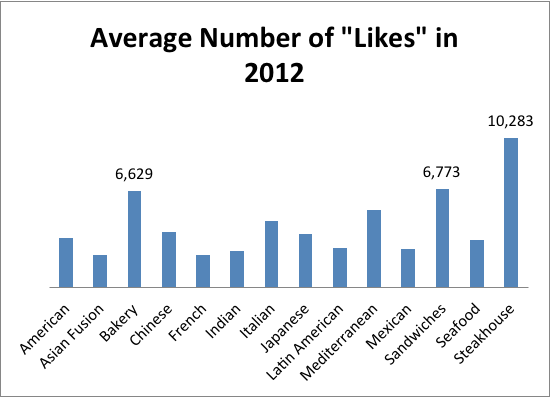 Reflecting the average Facebook Likes results, a steakhouse also stole the show for the highest amount of total Likes with 62,963. There’s a difference of 23,193 likes between the steakhouse and the runner-up American restaurant. If restaurants had social media awards based on statistics, steakhouses would be reminiscent of the 2003 Lord of the Rings, who won 11 total awards. 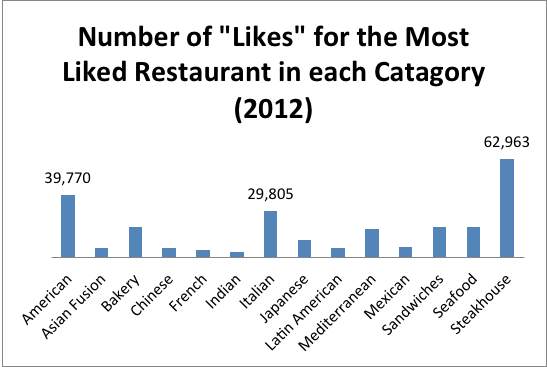 Let us know what restaurants you expected to see on this list? Also, feel free to give us your predictions on who you think will dominate the social scene in 2013. Lastly, if you’ve dined at any of these fine establishments, please share your thoughts (and photos!) with us. Now go, step away from your computer and enjoy some fine dining for great prices!

Tweet
2 Responses to “Most "Liked" NYC Restaurants In Social Media: The Sequel”