As Restaurant Week has been extended here in New York, and Social Media Week is currently underway, it seems fitting to write a follow-up to our post about restaurants on Facebook. We’ve shown you some clear winners on the social networking site. Now, let’s talk about losers.

Restaurants Are People Too

No, they’re not. Hate to break it to you, but not only is this a mistake showing social media ignorance, but it’s also a violation of Facebook’s Terms of Service. A Facebook profile is meant to be used by a person. A real person. Using real personal information. If you’re a business, then what you’re looking for is called a Fan Page.

Any friend of Papa Joe Aviance is a friend of mine.

Many businesses make this mistake. Some do it purposely, realizing that they can easily spam Friend Requests to get their numbers up. Most probably just don’t know how Facebook works. It’s interesting to note that Ruth’s Chris’s (possessive much?) profile picture claims to be “the official fan page”. Someone should tell them that’s not what they are.

I’ve had people mock my job before saying things like, “So, you just make Facebook pages for people?” However, as it turns out, managing a Facebook page is more complicated than people think. While anyone can mindlessly update their own Facebook, running one for a business requires thought, consideration and commitment. This, combined with the perception of simplicity, is why so many pages go abandoned.

If you build it, they won't necessarily come.

Engagement is important on Facebook. For that, you need people. More importantly, though, you need something with which those hypothetical people can engage!

While you certainly don’t want to spam your fans to the point of unliking you, it is good to update regularly. This could mean daily, but it could also mean weekly. It doesn’t mean yearly, though.

Facebook is realtime. While, it may not quite be Twitter, chances are you won’t see old updates in your News Feed unless you have really inactive friends. This means you should think about when you’re posting an update. For instance, do I need an entire month to make plans for the Oyster Festival?

The last post from Docks Oyster Bar could have worked well as a Facebook Event. People who RSVP will see it on their homepage as the date approaches, keeping it in their minds, and could also invite friends. Of course, simply posting more updates as the date approaches would be helpful, too. That brings us to the next point.

You started the page, and had a good ol’ time managing it. Then, Glee came back on air, and suddenly there’s no time for superfluous Facebook activities. Don’t neglect your fans. It’s not just about being polite; leaving your Facebook page unattended can look unprofessional. A Page is like a lawn, and without proper maintenance, weeds, in the form of random, stray wall postings, can begin to pop up. Regular updates will downplay the significance of these. 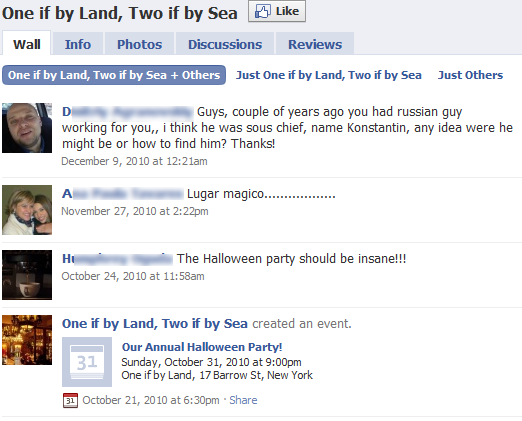 After throwing that killer Halloween Party where key staff go missing, never to be heard from again, why not follow up with some pictures?

We’re in the Phonebook

Of course, the wrongest way to do Facebook is by not doing it at all. Just as there were businesses in the 90’s that didn’t have a website, so too are there places in 2011 that don’t have a Facebook page. 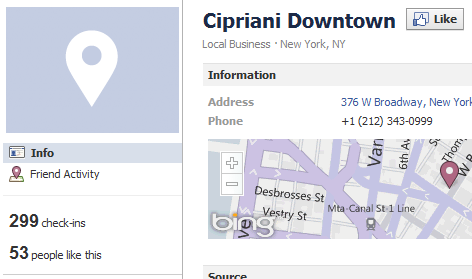 Bing is getting better branding than Cipriani.

There’s clearly demand for Cipriani, as people have been checking in. They’ve even liked the page. All that is waiting is for the owners to claim the page. Let’s just hope they don’t immediately abandon it. 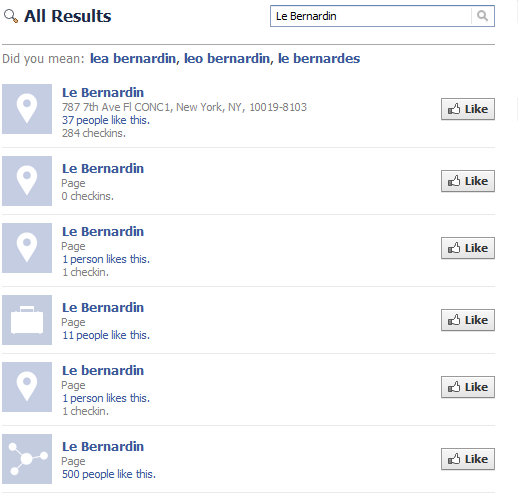 These aren't Les Bernadins you're looking for.

Though by maintaining a non-existent presence on Facebook, you run the greater risk of having your Wikipedia page turned into a “psuedo-page”. For a while, these Community Pages were able to be claimed. However, Facebook turned off that feature. For the time being, these 500 fans of Le Bernadin have opted into receiving updates from nobody.

So, if you’re a restaurant and you’re doing Facebook wrong, you’re missing out on big opportunities. You could impress the public with your enormous fan count, encourage loyalty and patronage through Facebook Deals or stay in tune with your customer base through engagement. All that’s required is you put in the effort, stay committed and follow some basic rules.