Blog
Blog > How We Use Facebook as a Page

Weeks have passed since Facebook began allowing users to transmogrify into Pages. They initially began letting users login as a page in an accidental roll out of an early stage of this feature. While it’s long been possible on Facebook to post as a page, this new change has given eerily human-like qualities to them. One bug allowed pages to attempt (unsuccessfully) to add other users as friends. Now with most of the kinks worked out, we wanted to talk about how best to operate a page given their newfound rights.

The first step is becoming the page. This is easily done through a link on the page itself (over in the sidebar on the right). I will now become Promediacorp. Does this mean I have access to the company credit card? 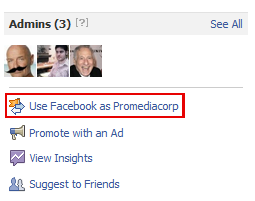 Not quite (though Facebook Credits makes it an eventual possibility). It does mean that my actions on Facebook will now be the actions of the Facebook Page for Promediacorp. I browse as them. I comment as them. I even Like as them.

No longer is Promediacorp’s fan page restrained to a singular place on the Web. It can now, through me, traverse across Facebook and interact with…well, mostly just other pages. This does present an interesting opportunity to brands for increased exposure. By “liking” relevant leaders in their industry and commenting on their posts, a page is able to carry its image into uncharted waters. Not only does this put the brand in front of all the fans that may be reading the post, but it could also grab the attention of the other page’s admins. Perhaps they’ll engage back. It could be the beginning of a beautiful friendship! 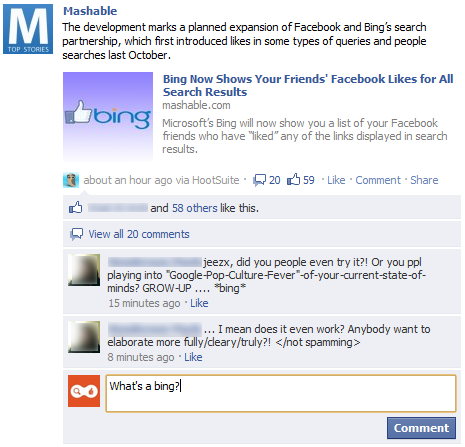 Just kidding. We know what a bing is.

See! Told ya we know what a bing is!

So, aside from frolicking around Facebook dropping your corporate opinions on unsuspecting walls, what can you do? Well, photos are more important now, as recent ones will appear prominently on your page. So, maybe hiring photogenic people is more important than ever.

Speaking of those photogenic people, you now don’t have to be a faceless corporation, which wouldn’t be suitable for a network called Facebook. Add the face(s) of your admin(s) to your page to humanize it. More practically, this lets people identify a contact. Customer service issues? Business opportunities? Christmas salamis? Well, now people know to whom such things should be sent.

Just go to your Page Settings, under the category called “Featured”. Aside from choosing Featured Page Owners, you can also choose Featured Likes, which will display on your page along with your non-featured likes. However, the non-featured likes will be randomly positioned, and may not always show due to limited spacing. So, you can play favorites with your business partners now. 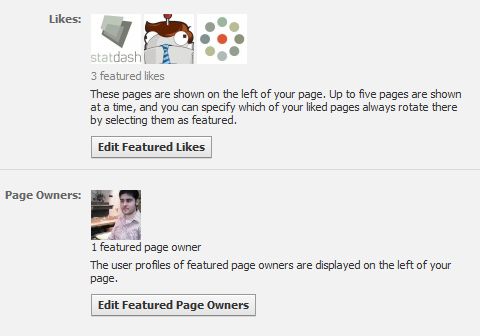 These are a few of our favorite things.

You may also notice as you’re being a page there will be several “Recommended Pages” showing up in the sidebar, based on the interests of your current fans. This seems like Facebook is really pushing “social” connections amongst businesses. It could also be great market research for you. Perhaps you notice that many of your fans also like Mountain Dew. Now you know what to serve at your anniversary bash! And the bash had better be extreme. You could also target ads at people interested in those other pages, as it would suggest you and it share a target demographic.

After you’re done embodying a brand, make sure you switch back to you, so you don’t miss out on your Farmville notifications.